I’m writing a blog post every day in November as part of a writing challenge. (Read why here.) Today, though, I’m happy to share with you Carrie’s global career check-in. I’m going to miss having Carrie only one time zone away but I’m so excited about her next adventure!

In ramping up for October as Re-Entry Relaunch month, I’ve spent the past few months mulling over how I’m going to relaunch myself into my next great thing.

Cate and I hosted a Re-Entry Reality Webinar and connected with some fantastic folks that had fabulous experiences to share about their re-entry realities. On top of that, Cate’s daily reflection questions have given me excellent food for thought. What’s next for me?

I knew it had to be something abroad because if I didn’t do it now…when would I do it? It’s time to take the plunge, push myself out of my comfort zone, and pursue my dreams abroad.

My last stint abroad seems like a distant memory since it was five years ago. During the last few weeks of my undergraduate days, I got the best graduation present ever—a full scholarship to study culture and literature in Quito, Ecuador for a month! It couldn’t have come at a better time as I was about to transition into graduate school, and I was ecstatic to push my Spanish skills to the next level.

In those five years since, I’ve completed a master’s program in intercultural communication and taught communication courses full time at a small liberal arts college. For those of you that have been reading my posts here on Small Planet Studio, I’ve always envisioned adding international travel and something related to education abroad on my professional docket.

Since my teaching contract ended in May, I’ve been at a crossroads, and I’ve been doing a great deal of reflecting, particularly after my Breaking the Global Career Path Mold post. I’d applied to numerous job postings in the U.S., and a teaching program in Spain.

Where should I go? What should I do? If I decide to stay in the States now, will I get another chance to be abroad?

I’m ready to pack my bags and explore again… After turning up empty handed in my U.S. job search, I decided it was my time to go abroad and to a Spanish speaking country. Once I made that decision, what I initially thought wasn’t an option suddenly opened up.

The program I’d applied to in Spain suddenly found a placement for me. The program is with the Spanish Ministry of Education where they send North American Language and Culture Assistants into K-12 classrooms.

It’s a fairly easy application process that opens up in January and closes in early April. Once you meet the minimum requirements (essentially a BA degree holder with an intermediate level of Spanish), the assignments are given out on a first come, first serve basis. It’s becoming more and more popular, and since I applied late, I wasn’t given an assignment. 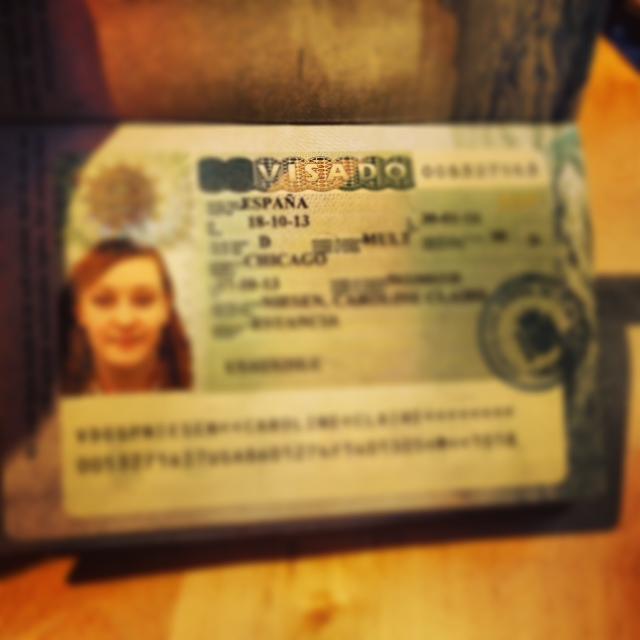 I got an email in late September stating I had been placed in my #1 region choice at a primary school. I had five days to accept or decline. Thoughts were racing through my head, and I wasn’t sure if I could accept it since the program started in October. Then, I thought…what do I have to lose? This is what I wanted, so let’s go for it!

So I did! After accepting, I got my official placement details, and I could look forward to spending the greater part of a year in a Mediterranean beach town in Southeastern Spain. I’ll be helping with English and culture lessons at a bilingual primary school.

I’m excited to be back in the classroom again and to help 5-6-7 year olds with their beginning English skills!

After a long visa process of gathering a medical clearance letter and a criminal background check (both of which had to be notarized AND apostilled, which, thankfully, weren’t affected by the government shutdown), receiving official letters from the Spanish government, flying to Chicago for my in-person appointment at the Spanish consulate…I finally have my Spanish visa in-hand.

My official leave date is the end of November, and I have no idea what to expect.  I’m trying not to just think about logistics and how I’m going to handle culture shock of being in Spain again.

I know that this is the right step for me because

1) I’m fulfilling a dream of living in Europe for a longer chunk of time,

2) my Spanish levels will skyrocket since I’ll be in a smaller town,

3) I’ll be test driving to see if living in another country is something I want to do permanently, and

4) I’ll be able to figure out if teaching English abroad is something I should pursue on a permanent basis.

Who wouldn’t be excited to live in the same town as this majestic light house? Not only am I excited to be abroad again, but I’m looking forward to discovering answers to what it is I want to be when I grow up. This will be an exploratory journey that will be another foundational step towards my global career path.

Have you been thinking about what your next step is after you’ve been abroad?  How are you deciding what’s next? What ‘aha’ moments have helped crystallize your plans?  Share with us in the comments section!

Are you joining Cate for the 3 on 3 in November? Let’s blog about the same 3 topics on the same 3 days. Get the details here. We hope you’ll  join us!

Carrie Niesen is an Associate Relauncher at Small Planet Studio. In previous lives, Carrie’s taught communication courses, lived abroad in multiple Spanish speaking countries, and is now hot on her pursuit for a location independent lifestyle. She enjoys helping the SPS community with all things related to re-entry and leading an ideal global life.

Are You A Returnee? -- Have you been surprised to find your return "home" harder than going abroad? I created the Re-entry Roadmap workbook just for you! // Or Do You Work With Returnees? I'm here to help you with innovative resources and training that will make it easier to provide meaningful support for your returnees.

Ep 05: How Hannah Unpacked Her Re-entry Backpack After Studying and Interning Abroad

Ep 02: How My Re-entry Story Can Help You With Your Reverse Culture Shock

Study Abroad Professionals – Get the Toolkit!